A little while ago I became interested in doing some high-speed photography. I'm sure you've seen examples of such.  A bullet bursting through and apple.  A water balloon popping and leaving the water hanging in mid air.  Now unless your feaky fast on the shutter, your just not going to be able to do it by hand. Instead you are going to need some additional hardware to achieve such a feat.

There are a number of offerings on the market at the moment. At the basic level, most of them are an implementation of a delay timer that is started by some external input (i.e. the sound of a balloon popping).  In my case, I chose to purchase a Camera Axe. Released under a Creative Commons license, the Camera Axe is an example of open source hardware (as well a software).  At its heart it is based on a Amtel ATmega328 mounted to a custom circuit board.

Part of what makes the Camera Axe appealing (at least to me), is the modular design that allows you to connect a variety of different combinations of triggers, cameras, and flashes.  While the Camera Axe is not the only offering to do so, in my opinion the available hardware provides a good range that will cover just about any scenario. 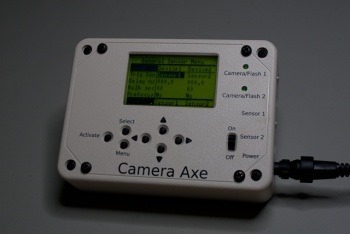 Now, I did purchase mine in kit form from Dreaming Robots, but they do also offer pre-assembled versions as well (but where's the fun in that).

I also purchased the following sensors with the kit:

As well as some miscellaneous cables (flash, camera trigger etc).

So far I have only had an opportunity to play with the Valve Sensor to create water drop collision photos. 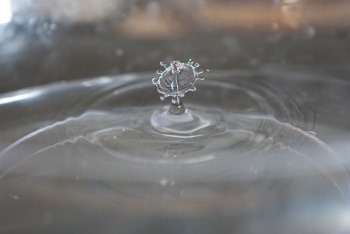 A CameraAxe is featuring quite high on my wish list at the moment, as sound/light/etc triggering is definitely something that interests me.

On the other hand, I'm tempted to build one myself using an MSP430, but I'm not sure if it's worth the effort...as the CameraAxe kit isn't too expensive, and the CameraAxe has a lot of built-in functionality that would take me quite some time to add to a custom-built system.

The Camera Axe kit I have is a version 4 unit. I believe there is a version 5 on the way soon. Depending on your timeline you may want to wait for that.